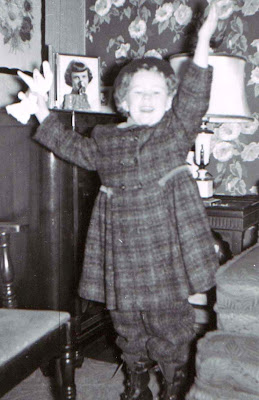 I wanted to be in the movies, and one had to run away to do that, for Sioux City was at least a million miles from Hollywood.

I was not angry at anyone–it was just something I had to do.

So I snatched one of my grandmother’s skirts–after all, for the movies, a movie star needed dress-up clothes–and slung it over my arm.

Deep into Iowa winter and snug in my red snowsuit with hood, wool mittens, and boots, I set off.

I had no idea where I was going, but even then, I knew I needed bus fare to get there, and I had only a penny in my pocket.

I wandered around town until I found West 7th Street, the sharp part of town, filled with bars and low-end and questionable businesses.

I walked into several bars and hit up several drunks for change–my first time panhandling. No one seemed to question why such a young child was all by herself in bars, begging for change.

Later, I would learn that my grandparents were frantic and that the Sioux City police had an APB out for me:

“Look for a little girl in a red snowsuit...”
In the 1950s, red snowsuits were practically mandatory outer wear for small children, so it seems that just about every unattended kid in a red snowsuit had been rounded up. But, somehow, in my bumbling way, I kept eluding the police and other searchers.

Even as nightfall began to fall, I was not frightened at all; sure, it was cold, but I had a pocket full of change, my grandmother’s skirt, a song in my heart, and Hollywood beckoning.

I just needed to find the bus station and buy a ticket to Hollywood. I had no idea where the station was, but I was supremely confident that I would find it soon.

Less than an hour later, my grandfather Dee Dee and Uncle Dude spotted me wandering around in a residential neighborhood, nowhere near the bus station.

They snatched me from the street, and slid me into the car.

I bawled and pitched a fit; I was so angry with them for thwarting my Hollywood plans. They just didn’t understand I wasn’t running away to leave them but to find my fame and fortune.

I was planning to come back as a movie star.

When I got home, my grandmother was crying.

It was then I realized how much pain I had caused my family, and I began to cry as well, out of guilt for scaring my grandparents and lamenting a dream interrupted.

I didn’t even get into trouble, just a lecture about the dangers of wandering off all by myself and staying away from the bogeymen lurking out there.

This would not be the only time I would run away from home; 14 years later (after being made a ward of the state), my motives and getaway plan better articulated and my anger at my grandparents heightened, I would flee Iowa and settle in Pennsylvania, where I continue to live to this day.

I have written about this second (and successful) escape from Iowa.