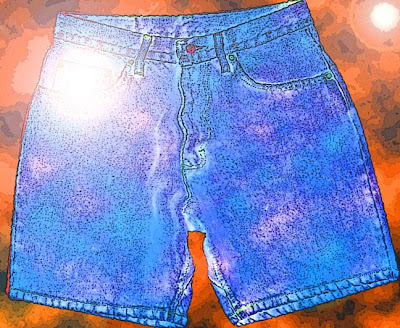 Life is pleasant. Death is peaceful. It's the transition that's troublesome.

Yesterday was very hot, about 83 degrees, high humidity, not the day to cook much of anything, let alone an oven meal. But I made baked chicken with gravy, onions, and carrots, baked potatoes on the side, and a steamed vegetable medley. The kitchen was about as hot as it could get and not be considered hell.

Well, maybe it was hell.

In July, I wouldn't even consider using my oven, but these transitional times between seasons seem to mess with our heads, and we carry over behaviors from the previous season (e.g., wearing shorts in late October when it's 55 degrees).

Given that most of April was chilly, yesterday's heat was a huge surprise. Even when hot weather is predicted, our bodies don't quite believe that spring and summer are impending, so we feel awkward switching to summer foods and clothes.

Still, my husband liked our dinner (low fat, even the gravy) and complimented me, but, then, he didn't have to spend two hours in a hot kitchen--he simply ate and ran.

I did drag out my shorts, a pair that didn't fit last year--not even close--so it was nice to slip into something that didn't have an elastic band.

This was definitely a positive transition, but I felt a little naked--not that I wear butt-revealing short shorts and plunging necklines (not my style)--and awkward, like I shouldn't be seen in public in such skimpy clothes.

Like the season, my body is in transition, and I'm rediscovering its slimmer lines and bones I forgot I had. I almost feel like someone else.

Have you noticed that when you gain weight, it's a much slower process than when you lose? It may not seem that way, but if you think about it, that 40 extra pounds took years to pile on. It takes only about 6 or 7 months to lose it. It's really quite difficult to gain weight--just ask a bodybuilder (or that former 90-pound weakling who used to get sand kicked in his face).

Transitions are awkward; even when making positive health changes, changes feel awkward, like donning those first pair of shorts. After all, you may have been eating junk food for the last five years, so those first few healthy meals may taste and feel odd and do strange things to your body, at least until your body adjusts.

The good news: your body will adjust, I'll soon adjust to changing seasons, easing into salads and grilled meat, and you'll soon be an old hand at your healthier diet.