Thought for the Day--April 28, 2011: Weight Watchers, Diets in General, and Writing Every Day 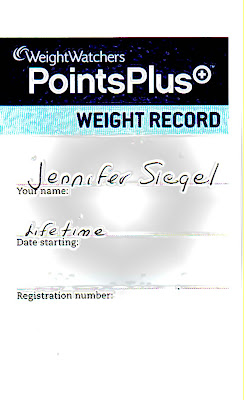 There's nothing to writing. All you do is sit down at a [keyboard] and open a vein.

I started this site on January 10, one week after I restarted Weight Watchers (almost four months after I started my healthy life style). I had heard about the new PointsPlus and 0 points fruit and thought it was worth another try. After three months, I'm still here and going strong!

Yes, as the above image reveals, I'm a Lifetime Member; my first stint with Weight Watchers started in 1973, which obviously dates me (LOL). I lost 43 pounds and made it to Lifetime status within six months, but I hadn't really changed my relationship with food. I still viewed "diet" as a temporary state, that once "the diet" was over, I could eat whatever I wanted. The old WW diet didn't help much; it was a draconian regimen, requiring at least 10 ounces of hard-core protein a day, very little bread, no potatoes or pasta, and a required serving of liver (ugh!) per week. I stuck to that last requirement for about three weeks and then lied about it on my food diary.

I stayed with Weight Watchers for about two years and then slowly slipped away, avoiding my monthly weigh ins. Of course, the weight crept upward. Over the years, I tried other programs: Nutrisystem, Optifast, several fad diets (too numerous to list), even Overeaters Anonymous (which may work for some people, but not my cup of tea).

One of the unhealthiest diets: one prescribed by a notorious diet doctor, who prescribed a high protein, 1,000 calorie per day diet, and phentermine, an "anorectic" drug, which works by decreasing appetite. Despite the NIH's apparent neutral stance on this medication, buried under the heading, "How should this medicine be used?," one will find this warning: "Phentermine can be habit-forming." The NIH recommends that the drug be prescribed for 3-6 weeks and then withdrawn. I was on this drug for about 6 months, and then it stopped working altogether. When I went off phentermine on my own accord, my appetite was voracious, worse than when I started; I was always hungry. To get my appetite back to where I was before the drug, I would have to continue taking the drug, and I wasn't willing to do that. I kept the weight off for about a year, but it was too much of a struggle.

An okay diet that revealed some important information about my body: a low carb, high protein diet prescribed by a doctor who was very much into the Protein Power program. I actually stuck to this diet for about two years, but I got bored with it and started to crave forbidden or highly restricted foods, such as popcorn, carrots, and fruit, and slipped back into my unhealthy ways.

A strict low-carb diet just wasn't for me--I love food too much.

But from that diet I learned something important that I have worked into the WW program: that my body tends toward insulin resistance. I now eat fewer carbs, but not "no" or "low" carbs. I know which foods will kick in my insulin resistance big time: white rice and potatoes, so (for the most part), I avoid these foods or, at the very least, limit amounts of them. But popcorn, carrots, and fruit do not kick it in.

I have also learned that I need to eat three meals a day and at least two, sometimes three and four, snacks, doable by eating smaller meals. By keeping my nutrition in balance, I can avoid the I'm-falling-off-the-cliff hunger.

When I came back last January, I was planning to pick up the materials and not going back, but something has kept me there. Joan Otto, my WW leader, has a delightfully infectious personality, and our group is now dubbed the "Monday Masters."

Thankfully, WW has evolved into a sensible and enjoyable program, allowing for some treats, while keeping a good nutritional balance. Most important, it's doable for the long haul. I see myself on a version of this diet for the rest of my life. In fact, if I had to, I could stick with this very version.

I decided that blogging daily about my journey would be another way to stay on track. It would be no holds barred, in that I would fess up when I messed up, which I have done. They say that confession is good for the soul, and so it is. I think confessing my transgressions has helped me to remain humble and human. It's so easy to become arrogant when one is on top, but it's more important to recognize (in public) our humanity and foibles. If I can help someone else during my journey, all that much better.

I have tried to write something each day; I have mostly been successful, although some of the entries have been added later (Is that cheating?). For example, when I was in Macedonia in late February and early March, I had no internet access, so I kept a handwritten journal and then posted when I got back. Blogger allows publishers to back date and front date posts, a nice feature.

Also, on some days, I feel dried up, like I have nothing important to say. I'm sure that there is a lot of mundane and repetitive content on this site. Some entries are inspired, others are not...

Daily blogging is hard work; I have developed a whole new respect for those who write and publish daily columns, year after year. It looks so easy, but it's one of the most difficult projects I have ever launched.