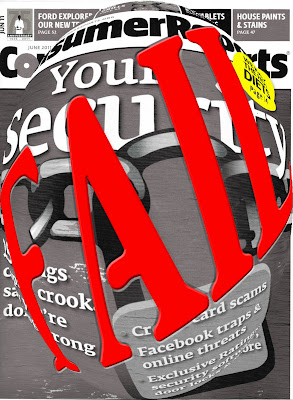 Yesterday, I was reading on the MSNBC site an article about the death of heiress Huguette Clark, when at the bottom of the page, I saw a form, calling for possible investigative news pieces, so I shot off the following:

In its June 2011 issue, in its article "Pick your ideal diet," Consumer Reports selected Jenny Craig as the top diet plan. Unfortunately, they selected a study that had been financially supported by Jenny Craig. There are other problems with their research methodology, for example, only Jenny Craig was studied in this particular trial. So I wrote a rebuttal on my blog, picking apart their methodology:

This may seem like a small matter, but if Consumer Reports is doing sloppy research on diet programs, who is to say that their next sloppy rankings might involve tires or OTC medicine, something that could cost someone his or her life?

I posted my disdain on their Facebook page: no response.

Look, I'm just an ordinary person who posts on an ordinary (low-traffic) blog, but I care about fair consumer reporting, especially from the supposedly unbiased Consumers Union.

Disclosure: I am a Weight Watchers member; however, in this case, I don't care which program "wins"; I care only for a truthful representation of the facts from an organization that is supposed to be conducting careful [consumer] research.

Thanks for any help here in getting the word out.

I don't know if MSNBC will look into this, but I will keep on trying to get the message out.