Do You Believe in Fate? 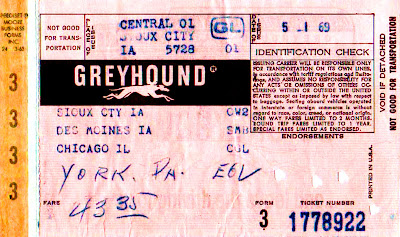 Fate is nothing but the deeds committed in a prior state of existence.

I'm not sure that I believe in fate per se, but I do believe that a series of small decisions can move people in unexpected directions.

Forty-two years ago, I made a decision that dramatically changed the course of my life.

The above images represent this major shift in my life, but it didn't occur all of a sudden--a series of events, some minor and some major--led me to leave Iowa and escape to Pennsylvania, where I have lived ever since.

I wrote a memoir about this shift; if you're curious, I have posted some excerpts from it here.

Had I not moved to Pennsylvania, my life would have been dramatically different--how, I don't know. I suspect that my life would have been less successful, but who knows? Maybe that "movie agent" who approached me on the street in Hollywood and gave me his business card was real, and I could have become a famous film star. More likely, he was a con artist who planned to get me alone and...well, never mind. Even at 17, I smelled a rat and tossed his card away. Lana Turner aside, genuine Hollywood agents don't generally scour the mean streets of L.A. for clients.

But wouldn't it be interesting if we could get a glimpse at what could have been? Would we then sigh with major relief or bemoan our ultimate life choices?

Some of what happens in our lives is out of our control; for example, for good or bad, we don't get to choose our natural parents or where we, as children, get to live.

But we do have choices in how we can transcend childhood traumas.

I'm happy with the path I have chosen, although it has often been a circuitous journey.

Read how a Greyhound Bus ticket represents a major shift in one life:

What unexpected fork have you taken in your life?