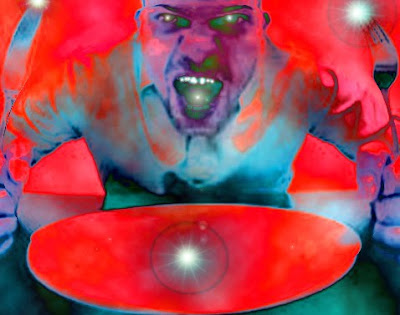 No diet will remove all the fat from your body because the brain is entirely fat. Without a brain, you might look good, but all you could do is run for public office.

Okay, okay, so the above quote is a bit snarky, but I couldn't find a quote that directly addresses this particular issue, probably because one of the so-called iron-clad diet commandments is widely-accepted:


Thou shalt not eat at least 3 hours before bedtime.

This is absolutely ludicrous; not only are such "rules" ridiculous, but they are often the very dictums that send us to the fridge after midnight.

A tendency toward mindless nighttime eating seems be one of the main nemeses of overweight people.

So why fight it? Why not learn to work with your own biology and use it to your advantage?

Each day, I plan for my hungry times; I eat fewer points (or calories) on the front end of the day, BUT those points consist of high-quality lean proteins and complex carbs (for example, a can of tuna in water is 3 PointsPlus and an orange, which is 0 PointsPlus). My body feels it when I choose simple carbs over proteins and complex carbs; all points/calories are not created equal, especially for insulin-resistant people. Protein will hold me for a long time, a bowl of cereal will not.

At dinner, I eat a larger meal, with high quality protein, vegetables (a mix of raw and cooked), and some carbs, but I'm trying to eat more fiber-rich carbs, such as barley (in place of rice, which stokes up my hunger big time). I will sometimes eat part of a baked potato or "carb protected" Dreamfield's pasta (mixed with Shirataki noodles). For some reason, a small portion of baked potato and the Dreamfields pasta have little or no insulin effect on me.

(Note: what works for me might not work for you, so you would have to find your own optimal food list.)

Then, throughout the evening, I have 3 or 4 snacks, all within my program PointsPlus, selecting from the following list: pistachios (or some other kind of nuts), low-fat ice cream sandwich (a treat), Weight Watchers mini bar (a treat), popcorn, sunflower seeds, non-fat yogurt, smoothie, fiber bar, and/or fruit.

I will often eat something late in the evening, sometimes close to midnight, but I choose foods that are less likely give me acid indigestion. In short, I would not eat nuts (high-fat content) late at night. Instead, I might drink a smoothie or a non-citrus fruit--it's all about common sense.

I rarely go to bed hungry; on the rare occasions that I experience night hunger it's because I have eaten a lot of simple carbs during the day.

For example, my lovely husband took me out for Mother's Day; I treated myself to an order of Coconut Shrimp (5 large), a whopping 14 points (deep-fried), along with pepper steak (probably 10 points). I had skipped lunch (big mistake), so later I did experience night hunger, but felt that I could not eat anything else (although I did give in and ate an ice cream sandwich). Not necessarily "bad," but a choice to use many of my allotted extra weekly points.

When I was a child, it was common practice for teachers to force left-handed children to use their right hand, often punishing those who "forgot" and gave in to their natural inclination.

Eventually, educators stopped that archaic practice, finally recognizing that other-handedness was not an aberration, just a difference--that trying to change a child's natural inclination was doing more psychological harm than good. Schools began ordering "left-handed" desks for the southpaws. And now educators are encouraging every child to practice writing and drawing with his or her "minor" hand, encouraging better facility with both hands.

It's the same with eating patterns; if we try to deny what is natural for us, then we are more likely to fail in our quest to make good life-style changes.

So go to bed with a satisfied (not stuffed) tummy.