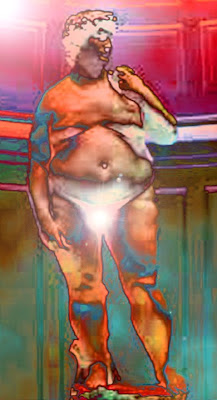 ...Instead of beating myself up for being fat, I think it's a miracle that I laugh every day and walk through my life with pride, because our culture is unrelenting when it comes to large people.

Other variations on the title question, often asked by both the well-meaning and the just plain mean:

"Doesn't she know that she looks like a horse in that outfit?"

"Why doesn't he do something about his weight?"

We have all heard such rude comments, usually about other people, although if these people are tsk tsking about others to us, they are probably doing it about us behind our backs.

However, I can explain to those who have never seen a fat day in their lives how fatness can creep up on us like a stealthy thief.

Have you seen one of those talk shows where these skinny celebrities don a 50-pound fat suit and then go out in public, where they get the "fat-experience" first hand?


The stares and glares.

Then skinny celebrity comes back a more enlightened person, but oh-so-tired from carrying that extra 50 pounds. "I JUST don't know they do it, carrying all that weight," she will say, sighing from the effort of it all.

Well, other than the unwanted editorials from the general public, it's not really like that; we don our 50-pound fat suits slowly over time, perhaps 10 pounds a year, so our bodies adjust as we gain weight. Often, we can go for years without really noticing, so carrying all that extra weight feels, well, normal.

I can't speak for the morbidly obese; I suppose carrying 200-300 extra pounds would have a major impact on mobility, but someone with that experience would have to address that.

Eventually, a tipping point might come, a wake-up call, sometimes a comment, sometimes an upcoming event, often a health scare (mine).

At that point, reality hits, and you go through a period where you begin to notice everything about your fat and realize how logy and sluggish you've been feeling, so you decide to lose weight.

Then you start asking yourself the above questions and making nasty comments about your own body. Once you get past that destructive point and start accepting yourself as you are, you stop beating yourself up and move forward.

Ironically, the changes are more apparent when you are losing weight, simply because you lose weight faster than you gain it. In my case, for the first two months or so, my body dimensions didn't feel all that much different (although I felt an enhanced sense of well-being, the benefit of not going on a starvation diet but, rather, a livable and sustainable life plan).

However, for the past two months, I have noticed a lightness of being about my physical self, an enhanced energy, although I am, by no means, slender.

Other noticeable changes: my legs are much slimmer and my knees often knock together, especially when I'm in shorts.

So, all you skinny people, forget the fat suit and zip your lip about weight when you're around people of size.

And don't try to "talk" your overweight relatives or friends into going on a diet. It won't work, at least in the long run. The decision has to come from within.

If you have overweight kids, then you might want to read STOP Stigmatizing Overweight Children for some sensible tips on how to create a healthier environment for your entire family.