Thought for the Day--May 19, 2011: Should McDonald's Fire Ronald McDonald? 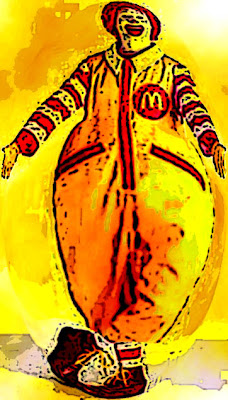 According to CNNmoney.com, a group called Corporate Accountability International is calling for the ouster of Ronald McDonald.

Very Interesting, but it's not likely going to happen. As long as the money continues rolling in, the red-headed spokesclown will remain as a McDonald's mainstay and icon.

Corporate Accountability International contends that McDonalds' product--fast-food--is making an entire generation of children sick and overweight and will ultimately shorten their lifespans.

I have noticed that children are getting fatter; just go to any school or read any article with photos of kids, and you will see for yourself. When I was very young, very few fast food restaurants existed. That is not to say that you couldn't get a greasy burger or fatty hot dog at the local diner or carhop (or even at home), but it was a big deal, not an everyday meal. Moreover, kids generally ate out less and exercised in a more natural and organic manner, playing outside, doing things that kids like to do: jump rope, hopscotch, bike riding, hula hooping, etc., the kinds of activities that children used to discover for themselves. 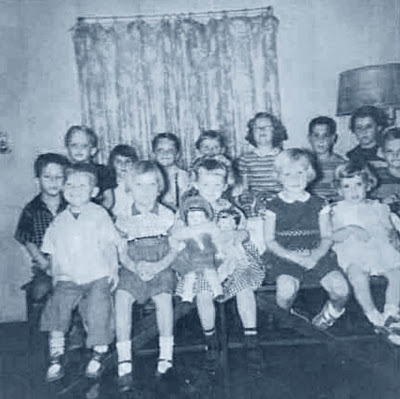 So while kids did eat burgers, hot dogs, French Fries, potato chips, candy, and soda, they burned it off in a most natural way: through everyday play. We really didn't have time to park in front of the TV and eat junk food all day long, and computers on a personal level did not exist. Mealtimes were mostly refueling opportunities and, quite frankly, unwelcome interruptions to the really important stuff of childhood: running back outside to our neighborhood friends.

I don't know when this all started to change. Back in the 1970's, my son pretty much followed my generation's pattern: go outside and play hard. McDonalds, Hardees, and Burger King existed back then, and we would occasionally go out and grab a bite at these places. Still, my son was a skinny twig and remained so until his teen years.

So what is my takeaway from these observations?


1. Parents are taking their kids to fast food places regularly and offering them fewer tasty but healthy whole foods.

2. Kids are getting less organic exercise--that is, kid-initiated exercise--and are sitting in front of the TV and computer (adults are guilty as well, for here I sit before my keyboard).

3. Kids are getting less exercise at school, as recess becomes one of the first items axed from school programs. (At my Catholic grade school, we had morning, lunchtime, and afternoon recess. However, I believe that our school day was longer.)

4. Overall, there are now more "convenience" foods sold at the supermarket, high in processed simple carbs, sodium, fabricated chemicals, and fats. These foods tend to be tasty, convenient, and heavily marketed, and working parents tend to lean on them on a day-to-day basis.

So consumer advocate groups may be placing the entire onus on the fast-food industry, when, in fact, much of the blame rests at home and on parents.

Therefore, getting rid of the clown is not going to solve much of anything. Parents will still take their kids to fast-food places, clown or no clown, Happy Meal toys or no toys.

We have choices: we can stand firm against our children's wheedling or give in to them. Parents need to be parents and recognize that our children will sometimes "hate" us for not giving in to their whims and wants. Kids have parents because they are not yet able to make good choices for themselves--they live for the moment, the distant future still an unfathomable concept.

Parents also need to reconsider their supermarket choices and select more whole food products, such as fresh vegetables and fruits and unprocessed meat, poultry, and fish. That is not to say that a family can't have a weekly "fun food" night, but it's all about day-to-day moderation.

I'm not much of a cook, but I have learned that it doesn't take much time to prepare whole foods. I use a lot of recipes that involve my oven, and my husband and I eat a lot of frozen and fresh vegetables, some of them raw. I also eat a lot of fruits (which my husband does not eat--his bad). Also, in the past 8 months, I have gotten faster with the prep (peeling and cutting) of whole foods.

The fast-food industry must bear some of the responsibility for the so-called obesity epidemic and make some very important changes in their products to lessen some of the long-term harm to customers.

Another suggestion: in commercials, stop focusing so intensely on the food itself (for example, slo-mo closeups of sizzling burgers and splashing sodas). Having lived in Europe for a year, I noticed one major difference in the way that restaurants advertise their establishments: most of the European focus seems to be on the ambiance of the restaurant and social significance of their spaces and less on the food itself.

Fast-food restaurants should stop advertising late at night. Almost NO ONE needs a Happy Meal or a Big Mac at midnight.

Will McDonalds' and other fast-food places make positive and healthy changes on their own initiative?

Probably not. The government may have to step in (like they did when the tobacco companies refused to make changes on their own) and enact some advertising, labeling, and recipe mandates; after all, fast-food products are making both kids and adults sick.

But don't blame the clown for all that is wrong in the fast-food industry. Instead, use his amazing high recognition by children for doing good in promoting overall healthy eating.