Thought for the Day--May 2, 2011: Negative Judgments and Stereotypes 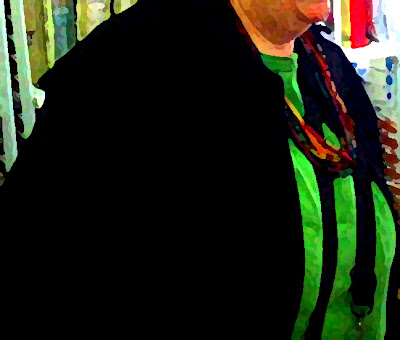 Trying to find a positive quote about this topic was nearly impossible, but I did find the above sentiment about fat people (especially women), all too common. Although I usually like to post wise and timeless sayings, this one by some clueless jerk (a professional tennis player) is, sadly, how most people, even other fat people, judge fat people by name calling and stereotyping.

At top, I have posted a partial picture of a fat woman. I'm not going sugarcoat the reality: she is most definitely fat, and that is a fact, not an opinion. But how does her state of physical being stereotype her and other fat people? How are fat people judged and assessed?

Recognizing that people are fat and how we relate to them (or ourselves) are two different things.

So when you see the above fat person, what assumptions would you make about her?

In the old days, when I was engaged in self hatred and hatred of other fat people, I might have jumped to these conclusions:

--She smells bad and only showers occasionally.

--She eats a lot of greasy and fattening food.

--She hates herself; why else would she let herself go???

--She has greasy skin.

There may be more that I haven't conjured up, but feel free to post more below (comments are moderated).

Fess up time: I wasn't about to put a friend or even a stranger in the spotlight (even anonymously) for this post, so I used my own photograph, taken in March, 2010, by my son Eric Brown.

Also, by using myself as a model, I can mix up the stereotypes a bit and show how, for the most part, these stereotypes are often untrue:

--While I sometimes do stupid things, I'm not stupid. When this photo was taken, I was on a Fulbright, and from what I understand, a Fulbrighter has to own some smarts and have accomplished something important.

--I smell just fine; I shower every day. I have favorite perfumes that I like. In Macedonia, my fave perfume, a blue liquid, had a melon essence. Here in the U.S., I buy knockoffs from the dollar store.

--Okay, I'm a little messy when it comes to housekeeping, but I try to look presentable, although my hair can get a little wild at times. I dress up when I need to, but I like to be comfortable in jeans and t-shirts when I'm at home.

--At the time of the photo, I did eat a lot of greasy and fattening food. I'm not going to deny that, but I'm also not going to judge it.

--Attractive? Ask my husband. I think he likes my looks, but most important, he loves the inner me. In my opinion, I'm average looking and always have been, no matter my weight. Besides, as I get older, I realize that physical beauty is waaay overrated.

--At one time, I did hate myself, but not in 2009-2010. I "let myself go" because I liked eating Macedonian food and indulging in cappuccinos and did little or nothing to put the brakes on my food and drink intake. I chose not to make wiser choices. I don't think this made me a bad person.

--At the time of this photo, I was working hard at my job. Also, I was exercising a lot; at least 2 days a week, I walked to and from the university, about 2 miles each way. Once a day, I also walked downtown (1 mile each way). I estimate that I walked at least 15-18 miles a week (often more). I did watch TV, but often as background, and I hate bon bons, and not sitting on the couch all day.

--I have a problem with oily skin, no matter how much I weigh, and greasy foods do exacerbate the problem, but I wash my face (and other oily parts) often.

--Okay, I own up to being slightly clumsy, but I don't have to be fat to be klutzy; I have been my klutzy self all my life and at several weights. I'm not now, nor shall I ever be, an uber athlete.

--I'm generally a pretty nice person. That's not to say that I can't have mean moments--most notably, when I broke my little toe after slamming it into the coffee table: I spewed words I didn't know that I knew, but it wasn't because of my fatness--it was because of the PAIN!!!

I can get moody, usually when I get hungry (yes, fat people do get hungry for real) or am overly tired. I am also known for speaking my mind, and sometimes I'm not overly diplomatic. But I regret those moments and try more to put a lock on my mouth or, at the very least, find smoother ways to broach sensitive topics.

In 2011, I'm slimmer now, less than halfway to my goal weight (and I'm in no particular hurry to get there).

BUT I have no wish to become yet another fat person hater or start judging and stereotyping others like some unenlightened people have most likely done to me and other fat people.

Whether you are fat or thin--or somewhere in between--keep this shocking piece of scientific research in mind:

--Michael Inzlicht, lead researcher in the study of negative stereotyping, at the University of Toronto in Canada (from LiveScience.com)