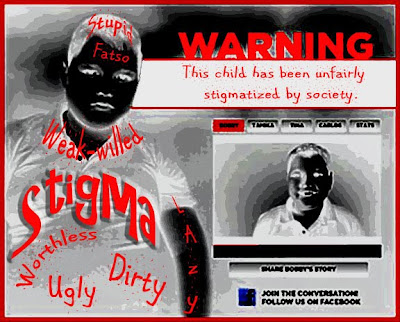 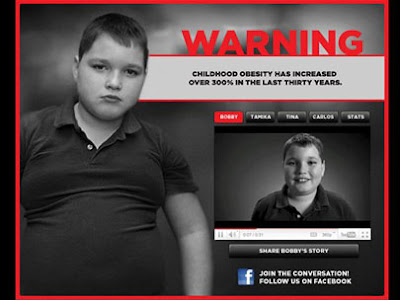 According to Katu.com, "This advertisement, part of a 'Stop Child Obesity' campaign in Georgia, won some enthusiastic praise for their attention-grabbing tactics. But they also have outraged parents, activists and academics who feel the result is more stigma for an already beleaguered group of children."
________________________________

Stigma is not an effective motivator.

"Shaming" and bullying a child into losing weight rarely works. I know this from personal experience; as a chubby child (I wasn't quite "fat," whatever that means), my well-meaning grandmother (who raised me) would often embarrass me in front of relatives, including children, in the hope that I would take action and lose on my own. When that didn't happen, she took me to our General Practitioner, who put me on strong diet pills.

By announcing my fatness in such a negative way to other kids, she created a situation where I was set up for bullying. Throughout my childhood, two of my cousins teased and bullied me mercilessly, which stings to this day. They were never held accountable for their actions; instead, I was blamed for their actions because I was the one who was fat, and although they were brats, they were skinny little brats, and being skinny made them okay, despite their behavior.

My grandmother and other relatives would often say, "If you weren't so fat, then your cousins wouldn't tease you so much."

I got the message loud and clear: I was not okay, so why bother?

I blew my allowance on junk food, stashed it, and ate it in secret. My grandmother could not understand why I wasn't losing weight on her regimen of lettuce leaves and bland chicken--that is, until she found the empty sunflower seed husks and candy bar wrappers under my bed.

That time in my life is done and gone; this is now, and with many stops and starts, I have moved on.

So here's the burning question for 2011:

How can we encourage our kids to lose weight and live a healthy lifestyle without stigmatizing them?

The answer is not easy, and many parents (and even grandparents) won't want to hear this, but the buck stops with them.

It all begins with YOU.

You need to be good food role models for your kids, even if you and your kids are skinny as rails. I cannot tell you how many times I have heard, "Oh, Little Joey has a hollow leg and can eat whatever he wants."

I can tell you with 99.9% certainty that Little Joey's "hollow leg" will eventually fill up, and, as an adult, Little Joey will likely be overweight and develop diseases related to excess weight.

Right now, it's tempting to look at active Little Joey and conclude that he does not need a "diet."

And you would be absolutely right.

So why would you put your entire family on a diet, just to support the needs of an overweight child?

Forget about "diets," at least in the traditional sense. Instead, think about ways that YOU can encourage all your kids (and significant other) to eat healthier and exercise more without singling out and stigmatizing your overweight child/children.

Here are some tips:

--Assess your pantry and get rid of (or limit) junk food.

--Assess your own eating habits and decide what YOU can do to improve them.

If you are already slim, then congratulations--this is a good start.

But are you a slim person who eats mostly junk food? If so, it is time to think about ways to begin eating healthier foods so that your kids can see that you are practicing what you are asking them to do. More than that, you will be a healthier parent.

If you are overweight, well, you know what you need to do as your kids' role model and to improve your own well-being.

--Gradually, start preparing your family's favorite meals, using tasty lower fat/ lower simple carb/ higher protein ingredients. Include healthy desserts (if that has been your family tradition. If not, don't start it now).

Do NOT announce that you are putting the family "on a diet." You will most likely experience resistance and put them on the defensive. If such a regimen were foisted on me like that, I would most definitely protest and, in my mind, tell you to pound sand and then do whatever I wanted.

--For snack time, offer popcorn, nuts, raw fruits, raw veggies, and seeds. These high impact tasty foods can be served in an attractive kiddie display, such as a carrot and celery happy face. The snack pack of low-fat microwave popcorn is a good choice, but it's okay to make your own popcorn using a limited amount of good oil. It's all about portion control.

--To encourage smaller portions, use smaller plates. However, if a child requests seconds, don't forbid it. Think of this as a lifestyle change, not a diet, and lifestyle changes should be gradual. You can't expect a food-driven child to suddenly give up his/her larger portions.

--Focus on the vegetable side dishes as being the centerpiece of the meal.

--Occasional high fat, high calorie treats should be allowed, for example, an ice cream sundae, but as a family event and away from home (unless it's a holiday or other special event).

--Encourage physical activity as fun family events, such as walking, biking, swimming, hiking, etc. Start small and work your way up to more sustained activities. The main thing: keep it fun and realistic.

--MOST IMPORTANT: never single out the overweight family members as being the only "reason" for the changes. Discourage sibling teasing and absolutely forbid sibling bullying about weight.

If a child asks (likely in private) about the changes, be honest, but be diplomatic. Just say something like,

I was getting a bit worried about your health and weight, but I also noticed that we were all eating unhealthy foods. So I decided to cook healthier meals for all of us.

Is there something you need and are not getting from our meals or family activities?

By asking the child that last question, you are sending a positive message: that he or she has some ownership in articulating his/her needs and wants and that it's okay to ask for what one needs and wants.

Listen carefully to the child's answer and consider how you can realistically fulfill what he requests.

--If you discover that your child is being bullied at school, don't stand for it. Get in touch with your school and let the principal know that bullying is not acceptable, and that if it doesn't stop, you will take legal action against the school. If possible, join the PTA and work on the anti-bullying committee (or, if if it doesn't exist, create it). No child has the right to bully other children. Period.

--Encourage your children to carry their own healthy lunches to school, but if they prefer to buy the school lunch, don't sweat it.

You can encourage them to make wiser food choices, but, ultimately, you wield little control over your children outside your home. You can only hope that they will eventually model your healthy behaviors.

--If your overweight child seems unduly troubled about something, consider taking him or her to a counselor. There are a lot of psychological reasons why a kid might overeat, and he or she is not likely to be able to figure it out on his/her own.

(Actually, this advice is recommended for any troubled child.)

Back in the late 1950's, early 1960's, there weren't that many overweight children, so there was very little guidance on how to help them. It was thought that picking on a child about his or weight in public would "shock" him or her into action. All too sadly, that model mostly backfired.

What kids need from their loved ones: unconditional love and positive regard, not constant and mean-spirited criticism, which they often get outside the family circle.

Ultimately, your overweight child holds his destiny in his own hands. Your job as a parent is to offer all the tools that you can to nudge your child onto the right path and hope that he follows it.

By the way, if we must place labels on kids, let them be positive ones: 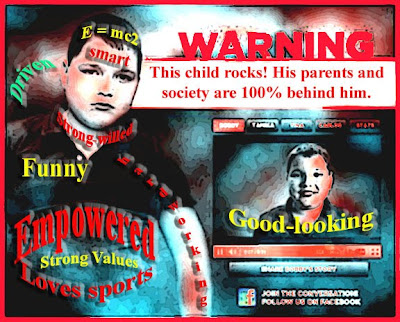