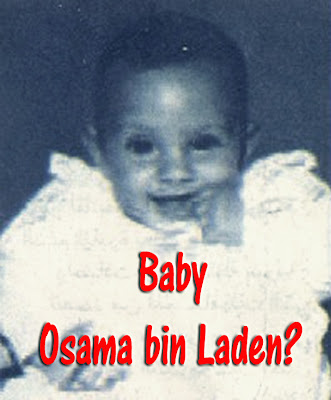 What if you had a chance to go back in time, to save millions of lives by killing one man? Andrea Collins will soon discover this mission to be more difficult than she ever imagined, as she takes a one-way trip into The Twilight Zone.

--Opening Narration to Cradle of Darkness, 2002

A week after Osama bin Laden's death, it has been strangely quiet among the conservative bloviators, although that is likely to change soon, as the "birthers" begin to re-form as "deather" conspiracy groups, despite al Qaeda's confirmation (and subsequent threats to the U.S.).

Meanwhile, how about a little speculation? What if bin Laden had never been allowed to grow up? If you were able to go back to 1957, the year of bin Laden's birth, and given the tools you need for your mission, would you kill baby bin Laden, even knowing what you know now?

It's an interesting question.

An interesting side note: a famous and rather hackneyed 2002 revival of The Twilight Zone series addresses this very dilemma: a time-traveler (Katherine Heigl) goes back into history and attempts to kill another face of evil: the infant Adolf Hitler.

My own answer would be a resounding "no." I just couldn't kill an innocent infant, for very few people are born "evil." I believe that, for the most part, the evil within has more to do with nurture and not with nature, so to kill an infant would not be something I could do with a clear conscience.

What I might try to do: rescue the baby from his familial setting and place him with a family that would not raise him in a situation in which he would likely develop as a terrorist. It would be a risk, of course; it could turn out that bin Laden, after all, might have been born with the "evil" gene.

No matter. If Osama bin Laden didn't exist or had been miraculously raised by an American family, another face of evil would have emerged to fill the leadership of al Qaeda, for evil (like nature) abhors a vacuum.

Although we are rejoicing the killing of bin Laden, we should not be fooled into believing that we have cut off the only head of al Qaeda, for evil has many heads; expect to see another leader rise up--and soon.

Finally, evil is like a cockroach; you can kill it, but its progeny will multiply 1,000 fold.

A moment of silence for Andrea Collins. She sacrificed her life for the good of mankind, but she also created the very monster she sought to destroy. History can never be changed. Not even in The Twilight Zone.