A Beautiful Day of Babies and Baseball... 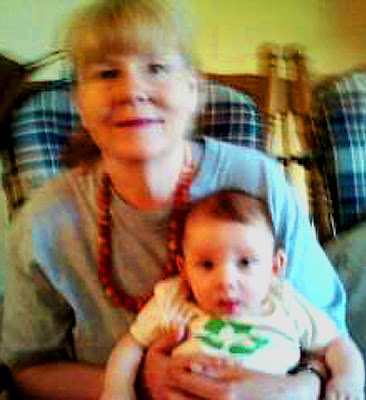 Any pitcher who might throw at me should know I'm not giving up my day job or trying to get anyone else's job. I just can't think of anything cooler than being one of the boys of summer!

Yesterday was like a holiday; we went to Mark's (my brother-in-law) for crabs, ham, fruit salad watermelon, and babies, both new and older.

We saw two-year Sean for the first time since 2009 (other than on Facebook)--how he has grown, and so smart, too! Lots of blond hair and big brown eyes.

In the above photo (sorry about the poor quality; it's a cell phone image), I'm holding a very content and happy Henry. I later held Owen, but no pic of that. Owen is smaller of the two, but other than that, they are identical twins, perhaps mirror image! Cute as buttons.

Later, Jerry and I met Harvey and Charlie in Baltimore for the O's game; Unfortunately, the St. Louis Cardinals soundly beat the O's 5-1, but it was a gorgeous breezy summer evening--hot, but not too humid--so I can't complain. We visited our myriad friends at the stadium, so that was fun.

I had a pretty good food day. I behaved well at Mark and Missy's, eating only ham, two crabs, fruit, and two slices of watermelon.

At the park, I ate a large Turkey sub with sprouts and lettuce (no mayo, which I don't like anyway).

I finally get it: if I eat a large hunk of bread, something else has to go. It's just that simple. It's all about staying within my allotted points while still enjoying what I eat.

Some day, this food business might become second nature, but, meanwhile, I need to be aware...

Later!
Babies Baseball Garth Brooks Index A Index B Thought for the Day--June 30 Thoughts for the Day Twins