Flaunt (us) Or Does My Butt Look Big? 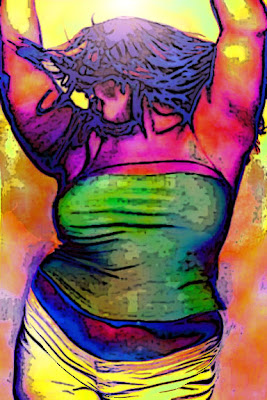 You've got IT, so flaunt it!

Even if we don't feel especially outstanding in any significant way, at times we need to present ourselves to the world in the way we want to be seen.

As an overweight older person, I want to present myself in the best light possible; I'm not going to wear a belly-exposing tee-shirt or shorts that expose my butt cheeks or crack.

I'm going to wear clothes that minimize my physical weaknesses, for example, my large upper arms and my bustiness (yes, I see that as a weakness and a burden I have endured since age 12).

On the other hand, I like my legs and don't mind showing a little upper leg. I also love jewelry, mostly stone necklaces and ostentatious bling rings with huge stones, the bigger, the better, most of them fake or inexpensive stones.

The point is: we should flaunt those attributes that make us feel good and hide the others.

For example, I wouldn't be caught dead in a bikini--I'm still trying to lose the baby fat around my middle, never mind that the baby is now 41 and has a 6-year-old daughter. (LOL)

I'm not sure I even want to be seen in a bathing suit, although the ones for this year seem to offer, ahem, more coverage than previous years. Manufacturers have finally figured out that most of us don't want to strut around in a butt-thong bathing suit.

But I will bite the bullet and find a suit that I can wear around family; I love to swim, but I have always been modest in dress, even in thinner years. I would be more than happy to return to the days when bathing suits offered full-body coverage (I'm also very fair-skinned, so this wish has more to do with sun protection rather than modesty).

I like to people watch; recently, I saw a young woman, very overweight, who was wearing a belly-exposing tee-shirt. Her bare belly actually hung below her nether regions. Now, I personally would not find that very attractive, but she seemed happy enough in her own skin, so who am I to say or even judge? Maybe if we were all like (in attitude) that young woman, perhaps the world would be a happier place.

At some point in her life, she may decide to lose weight for health and even vanity reasons, but for now, fatness is her reality.

Flaunting ourselves goes beyond the physical; if we have done something outstanding, there is nothing wrong with tooting our own horns, just as long as we aren't overly annoying about it.

The gay-rights people have been accused of "flaunting their lifestyle," but why shouldn't they flaunt who they are? By "flaunting" themselves, they have educated others that homosexuality is not a choice but a natural state of being. As a result, gay marriage is becoming a reality, with the recent New York state gay marriage legislation representing a huge victory for gay rights. Had gays continued hiding in the shadows, these victories would not have been possible. If not for the brave souls who flaunted their blackness, African Americans might still be experiencing Jim Crow laws.

Although I'm not entirely comfortable with flaunting my fat, I do respect fat acceptance groups, such as NAAFA, for they are on the front lines of the battle against fat prejudice, which still prevails, both legally and in practice. I strongly believe that the battle against obesity will be won by first accepting obese people as full members of society and encouraging them to focus on their strengths instead of their fat. NAAFA.org is working toward this goal.

Right now, the medical community tends to stigmatize overweight people by chiding and embarrassing them instead of educating them about the possible risks of obesity.

So, today's message: Now that you know you've got it, just flaunt it!
Flaunt Flaunt.us FlauntUs.com Index F NAAFA Obesity Talk Diet Thought for the Day--June 28 Thoughts for the Day