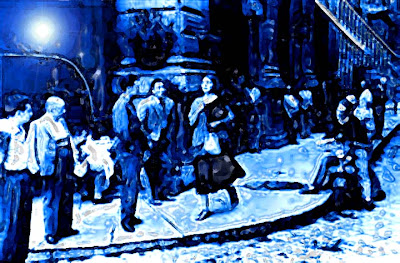 Evil is the shadow of angel. Just as there are angels of light, support, guidance, healing and defense, so we have experiences of shadow angels. And we have names for them: racism, sexism, homophobia are all demons - but they're not out there.

In today's paper, there was an editorial by a young female editor about having to endure "cat-calling" and other harassing behavior by men on the street.

Does that crap still happen?

I don't know why some men think such behavior is, in any way, acceptable. Women (and children) need to feel safe out in public and men hitting on women (even if it's just in "jest") can be frightening.

Also, yelling at and mocking overweight people is a big no-no. Okay, I get if someone doesn't "like" fat people, and no matter how much I wish I could change the heart of haters, one can think whatever he or she wants.

However, one should keep one's thoughts and feelings inward and move on, perhaps examining one's own shortcomings and faults.

Besides, fat people already know that they're fat; each morning, they can see themselves in the mirror. And, sometimes, the decision to remain fat is a conscious decision.

Also there may be a medical reason why someone is overweight, but that is not for the rest of us to decide.

Last night's cookout was great; we provided the food (steak, shrimp, corn, asparagus, carrots, and watermelon), and Eric and Amy cooked it. I like that plan--should do that more often!

It was a gorgeous night out, fairly cool and filled with fireflies.

Tomorrow we get to babysit Rhia, our granddaughter (YAY!).