Hook, Line, and Sinker--A Day at the National Aquarium 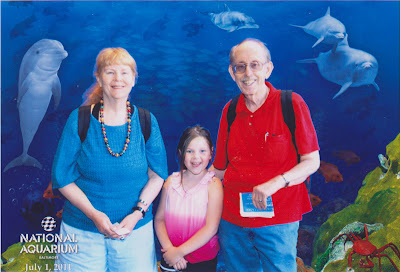 Jerry and I spent the day at the National Aquarium in Baltimore with our granddaughter Rhia. What fun!

We saw sharks, dolphins, jellyfish, and a rain forest, among other sights. We saw Dora the Explorer and her friend Diego in a 4-D adventure film, the 4th dimension having to do with smells, vibrations, and splashing water on the audience, which Rhia did not appreciate. Her exact words: "This is NOT acceptable!"

But, overall, it was great fun, and by day's end everyone was duly worn out.

The hook, line, and sinker of the day: we actually bought the above photograph along with an entire photo package, no doubt overpriced.

How can you say "no" when the photo includes your precious grand baby?