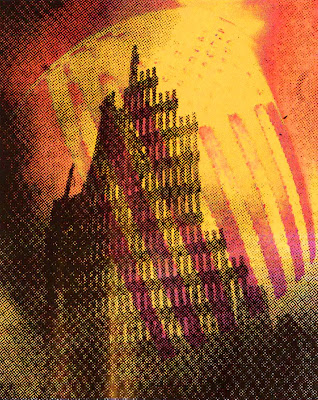 A collage by Jennifer Semple Siegel
Created shortly after 9/11
______________________________
As we all know, today is a very sad anniversary, so I just want honor those who have given their lives, either as citizens in the wrong place at the wrong time or soldiers who gave their lives in their quest to defeat Osama bin laden and his thugs.

No need to say any more on this topic.

On a personal note: Today is the 1st anniversary of my decision to get healthier and lose some weight. Despite a difficult summer, I have succeeded in losing 55-60 pounds.

I have been maintaining, more or less, for the past two months. It's been tough, though.

So, today, I am reaffirming my decision to keep at my plan and get going on those last 25 pounds, but still in a healthy manner.

I have worked too hard to backslide into unhealthy habits.

I'll be making some changes on this blog, including the title and design. It is clear that I won't be updating this space daily, so I have found a better name (and matching domain name), which I will share with you later.

I have decided that I would rather write fewer higher quality articles and more meaningful content. I may also be moving some articles from some of my other blogs.

ThoughtForTheDay.us will still bring you here, so if you have bookmarked this page, worry not!