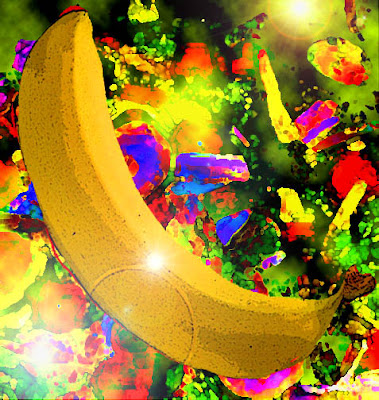 Be careful about reading health books. You may die of a misprint.

Last year, on September 11, 2010, when I began my healthy eating regimen, I was certain that eating smaller portions was the way to go. And for a while, concentrating on smaller portions worked very well: I was rarely hungry, and I lost about 25 pounds in less than three months.

Around Christmas time, I started to feel hungry all the time. At first, I thought, perhaps, that all the holiday goodies were just stimulating my taste buds.

But even after the holidays, I was still hungry all the time.

Then I heard about the Weight Watchers' new PointsPlus program and 0-points fruits.

I had tried the previous WW points program, and I really didn't like it too much; it still felt too much like a diet, and calculations were too cumbersome, but I thought I'd give the new program a try. My plan was to pick up program materials and then not return for meetings.

Nine months later, I'm still attending meetings, having missed only two, one when I was overseas and one missed due to the big flood of 2011 (Irene) a few weeks back. We, not being near a body of water and not having a basement, were okay, but roads were closed, the area under a state of emergency.

If it hadn't been for Weight Watchers, I, no doubt, would be back to everyday overeating.

I definitely have WW to thank for my sticking to my guns for over a year.

The main advantage to Weight Watchers: a member can eat as little or a lot and still stick to the program and lose weight.

I eat BIG; I have a big appetite, and it takes a lot of volume to satisfy it. Now, when snacking, instead of reaching for potato chips, cookies, or bowls of mashed potatoes, I reach for raw carrots, raw peppers, or raw spinach (I didn't even know I liked raw spinach until about two months ago). It's amazing how filling raw veggies can be.

While it was the 0-points fruits that had drawn me back to WW, I actually eat more raw veggies than fruit. I typically eat only 2-3 fruit servings a day. But the fact that it is there if I need it has been incredibly freeing. In other words, the psychological aspect of having permission to eat as much fruit as I want has allowed me to refrain from overeating it.

Does that make sense?

My other comment about the Weight Watchers program: my husband, although he's not a member, has been doing the program with me. Unfortunately, he does not like fresh or even canned fruits, so the program wasn't really working for him. He was hungry all the time!

However, he does like grape, tomato, V-8, and pineapple juices, but they all have points attached. One day, it hit me: why not give him "permission" to consume three servings a day of juice without points attached?

I set forth these sensible guidelines (for 0-points):


--The portion, limited to three per day, must be measured.

--The juice must not contain added sugar.

--The juice must be consumed straight (for example, not part of a sauce or a mixed drink). In short, if his juice is cooked as a sauce, then it has points attached. In short, his 0-points juices must be taken straight.

I suggested that he try this plan for two weeks and gauge how well it worked.

Well, I'm happy to report that, for him, having his three juices without penalty has worked beautifully! He's less hungry and much happier now. His weight has stabilized (he's at his normal weight now), and he doesn't feel guilty when he reaches for a juice. Better yet, he has managed his hunger by reaching for a juice. He never drinks more than three servings, often just two, so he doesn't "overjuice."


When a specific health program doesn't quite fit someone's likes and dislikes, it's okay to tweak the program and personalize it.

A caveat here: if you like fresh fruit, you should eat fresh fruit as your 0-points--no mixing and matching. Otherwise, you are likely to end up on the slippery slope of weight gain.

No way will a piece of fruit ever reach my husband's lips, so this particular change works well for him in that he will get the proper nutrition that he needs.

I, on the other hand, love fresh fruit, and drinking juice does very little for my palette, so the 0-points juice option would not work for me.

There will be some changes on this site; I want to branch out in other topics other than food and diet. I will still write about these issues, but I will also write about other topics that interest me.

The new title will be "Food For Thought," which, of course, refers to more than just food. If you have bookmarked this page, the old URL (ThoughtForTheDay.us) will work as a redirect to this site.

I will also be revamping the site.