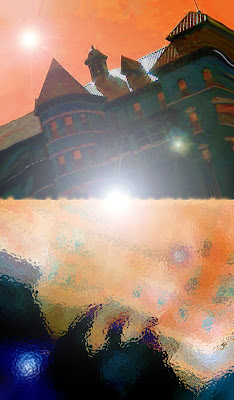 Reality is never as bad as a nightmare, as the mental tortures we inflict on ourselves.

I haven't had a nightmare for a long time, but I had one heck of a doozy last night.

In fact, it was so frightening that when I woke up my heart was pounding like crazy--very realistic.

In this dream, I was being stalked by a bearded man with black hair and some of his henchmen (stereotypical looking goons).

I don't know why I was being stalked, though. Nightmares seem to be big in fear, but short on specifics.

I was in Las Vegas--a good setting for a stalking dream--trying to weave my way around the rows of the slot machines on the casino floor. Somehow, I ended up in a restaurant, sitting at a large table shaped like a "U," eating a dessert> My table mate (a stranger) said, "That man with the beard seems to be looking for you."

I jump up and started fleeing again.

Earlier, I had actually been "caught" by my stalker but then escaped; now I was running from him again, but he was always just behind me.

I found my way to a hotel room and locked myself in.

Someone, presumably my stalker, pounded on my door...

Then I started to awaken.

As I awakened, I realized that my pursuer had been tracking me via GPS in my mobile phone.

Part of me wanted to return to the dream so that I could turn off my phone and thwart the stalker...Kind of silly because I had already thwarted my stalker by waking up.

Where do these dreams come from? I honestly don't know. As far as I know, no one is following or bothering me.