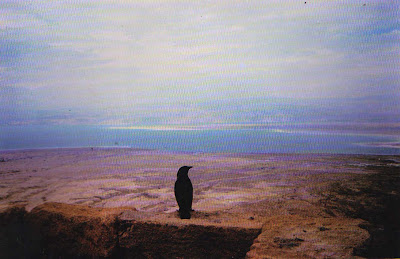 
If you want to know your true size, just glance at the horizon.

Besides being deeply involved with promoting the Fulbright program in Costa Rica and assisting in special environmental projects, Mr. Chacón is a fine photographer who has published Instantes, a photographic journey depicting moments in time and in diverse places.

For each photograph, he has added a fitting caption and has translated it into English.

I was particularly drawn to the above photo and its caption, because it fits so well with the theme of this blog: the fact that physical size should not matter--and does not matter to at least one person (ME!).

Size is a relative state; in the vastness of the world--and universe--we are all minute creatures, no matter how famous, unknown, beautiful, plain, large, or small.

And I don't mean "minute" in a negative way, for although we, individually, take up so little space in this universe, our contributions need not be insignificant, as evidenced by great people who have made such profound contributions to humanity: Jesus, Einstein, Pauling, Pollock, Tolstoy, etc.

Even the bird in silhouette that ponders the horizon beyond can also make a profound impact, even years later, for this 1972 photo has reached out to a blog writer, 39 years later, and made her think a bit more about the greater world and her place in it.

And others who stumble upon this post may also be struck by the little bird, who, one day long ago, stood on a ledge in Israel, looking out at the horizon, a moment captured by someone who saw the beauty of a small creature, both great and small, taking a short pause before flying off.

Each year, the Fulbright Association welcomes Fulbright Alums to its annual conference, which takes place annually, odd years in Washington, D.C. and even years abroad. Next year's conference is tentatively scheduled for London, England.