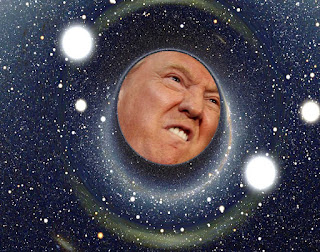 Stop complaining about Donald Trump.
Stop acting like you don’t know or understand how he got to where he got. He is exactly the result of your politics, which, along with your propaganda arm FOX News, manifest into this beast slouching towards the throne you decided you wanted, even at the expense of the country it rules over.
Trump is not doing anything you haven’t been doing yourselves, for years.
Lying? Your entire platform is based on lying and distortion.
You are incapable of having an honest discussion. Death Panels? Obamacare? Weapons of Mass Destruction?
Bragging? Do you guys not hear yourselves talk? America #1, despite only being #1 in mostly really shitty categories, like imprisonment and wealth disparity, while being terribly ranked in education, civil liberties, science, job security, etc.
Racism? Bigotry? Your boy Ronnie Reagan with his “Welfare Queens.”
Do you really think we don’t know what “States Rights” means?
Waving Confederate flags on gov’t buildings?
Ignorance? Trump is ignorant on international issues? You guys (along with too many Dems) use invasions without the slightest concerns for cost and consequence.
You can’t even learn from others mistakes. You watched the Soviet Union get its ass whooped in Afghanistan, but decided, “Nah, we got this.”
You literally played out Osama Bin Laden’s plans he announced on video. And still, you want more.
Inaccurate Claims? If the Republican party didn’t use inaccurate claims, you wouldn’t have anything to say.
“Voter fraud”! “WMDs!” “Welfare Drug Tests!”
Birther Movement? You guys brought that shit up. You’ve done nothing but try to delegitimize Obama’s presidency based on your racist madness.
You guys have a lot of nerve complaining about Trump after doing exactly what he’s been doing for years.
The only difference between you and Trump is that he says it without a filter.
Go on. Show me something Trump has said or done, and I can probably find a dozen Republicans either explicitly or implicitly saying the same fucking thing, years ago. On FOX. Everywhere.
He is you. He is yours.
Own him.

2016 Copyright by Rich Herrera. Originally Posted on Facebook and Reposted here with Permission.