The Great Toilet Debate of 2016: A Solution in Search of a Problem 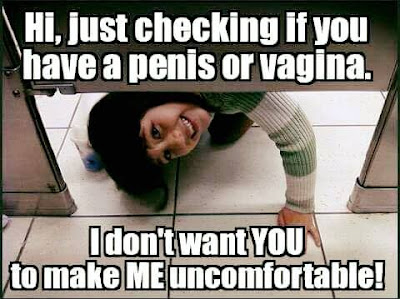 I am absolutely gobsmacked at the passion that this non-issue has created in such a short period of time; I (and others) have been blocked on Facebook by hysterical parents who feel that pedophiles will molest their children if we allow transgender people to use the restroom of the gender that does not match their birth certificate.
Well, let’s get this truth out of the way right now:
Male or female, you, like it or not, have most likely shared a public restroom with a transgender person and didn’t even know it.
As the law stands now, a muscled, tattooed guy is not likely to hang out in the ladies’ room, and a lithe, frilly gal is not going to stand next to you at the urinal.
But mull on these unintended consequences of Gender Laws for Public Restrooms:
1.       If laws specifying that if people must use the rest room that matches their birth certificate, then you will encounter manly men using the women’s room and girly girls using the men’s room. Transgender men and women.
2.       Also, you will not be able to bring your opposite-sex child with you into your mandated restroom, and that is genuine bad news for parents whose small children who should never be alone in any public restroom.
Here is another truth: transgender people just want to do their business and split, ASAP, not molest your child.
Just a few months ago, we were all using public restrooms, more or less in relative peace, if not with total ease. I have always found public restrooms a bit creepy and have never understood the need of some females to use them as social gathering places. Mostly, these spaces are smelly and dirty, to be avoided whenever possible or used quickly and without fanfare.
Also, too many of my fellow females are total pigs, choosing to pee on the seat and not cleaning up after themselves (I have learned my lesson). And then there is the obnoxious loudmouth in the next stall who yaks on her phone while tinkling.
So, no, I don’t like public restrooms.
I also have another reason – something that happened to me in childhood –  why public restrooms give me the shivers:

I was six when it happened to me, in the mid 1950’s – a different world and time.
At the time, I lived in L.A. with my mother and stepfather.
As was our custom, my stepfather dropped me off at the local movie theater – back then, going to the Saturday morning movies was a cool thing for kids to do; it was a great bargain and de facto babysitter for parents. Also, before the movie rolled, the theater management raffled off small prizes, mostly trinkets depicting celebrities and fictional characters of the day, so it was great fun.
I sat in my favorite front-row seat.
A teenage girl with a perky brown ponytail, white frilly blouse, gray poodle skirt, and saddle shoes sat next to me and struck up a conversation. She seemed pleasant enough, and it was nice to have someone to talk to, even if she was almost an adult.
She asked me where my parents were, and I told her that my stepfather had dropped me off and would be picking me up after the movie was over.
When the lights went down, we watched the cartoons – then the main feature started rolling.
As the movie progressed, she became increasingly proprietary, shushing me if I talked – which being six, I did a lot – and restraining me if I wiggled around too much.
She was making me uneasy, but she was older, and, in those days, one did not question elders, even teenagers. No one talked about stranger-danger.
I told her I had to go to the bathroom – I thought that if I could get away from her, I could move somewhere else or attach myself to a theater employee until my stepfather arrived to pick me up.
No dice.
“I’ll go with you,” she said, grabbing my hand and dragging me to the ladies’ room, where we were alone.
I remember shivering and trying to poke around in the bathroom stall, hoping she would give up and leave me alone.
“Hurry up!” she said, snarling. “And flush!”
After washing my hands, I grabbed a paper towel and then, my hands still wet, another towel.
She grabbed the second towel from me and slapped me hard in the face. “YOU ONLY GET ONE TOWEL!!!”
I started crying.
“SHUT UP!!!” She slapped me again, yanked me out of the bathroom, and led me back to our seats.
My fear stuck in my throat, my cries muted and choked.
This time, she pulled me into her lap and hung tight onto me; if I moved or whimpered just a smidge, she squeezed hard, nearly knocking the breath out of me.
In this fashion, we sat throughout the rest of the movie. I remember little about it – a black and white slapstick comedy with winter scenes and funky fur coats – I just remember it was too long and wishing it would end soon and hoping she would let me go when it was over.
I thought it was possible she might keep me forever.
Maybe kill me.
Finally, the credits started rolling, and the lights came up.
She let me go.
I jumped up and dashed up the aisle, weaving in and out among other patrons.
My stepfather met me in the lobby, and I ran into his arms.
I never told him or anyone else about my captor. My shame was so complete; I had been totally intimidated and humiliated. I thought if I told, she might find me, capture me again, and, perhaps, even kill me.

Looking back, I doubt very much if she would have been brought up on charges (if authorities could even find her); it would have been my word against hers, and children in those days weren’t taken seriously, often accused of magical thinking.
Tonight was the first time I told anyone, including my husband, about this incident.
Somehow, all this bathroom talk jarred loose this deeply-recessed memory.
I hadn’t been sexually molested – at least as I understood it back then (in her mind, there may have been a sexual component, but, technically speaking, no) – though I had been thoroughly violated and, in essence, held against my will for a few terrifying hours.
I'll never know why this girl wanted to control a small child that day – perhaps it had been a power trip or something more sinister roiling in her sick mind. I sincerely hope this was a one-off for her, but I suspect not. Even at six, I could feel her visceral and utter need for complete control.
This girl was not a transgender person.
She wasn’t a boy.
I doubt if she was even gay.
But she was a seriously disturbed young woman who had every right to be in that ladies’ room. She could have done anything to me there, even kill me. No law could have kept her from doing just about anything to me.
My point?
I believe the national conversation should shift away from enacting laws designed specifically to discriminate against transgender people – who are no more likely to molest children than anyone else – and encouraging parents to use common sense with their children.
This is an instance when helicoptering is a good thing.
Small children should not be dropped off in public places without adult supervision; I’m not sure what my stepfather was thinking.
While it was a different time, and parents overall were more hands off, I was much too young to be left in a movie theater by myself. I simply didn’t have the maturity or the physical strength to fend off my captor.
To be on the safe side, small children should always be accompanied by an adult in public places and public restrooms.
However, totally unenforceable public restroom law, current and proposed, is just a smokescreen designed by the far right to discriminate against the transgender community and has nothing to do with protecting children.
Nothing.
Only parents and caretakers can protect their small children from predators.

Bathroom Laws Politics Right-Wing Politics The Great Toilet Debate of 2016: A Solution in Search of a Problem Transgender Community